The Roosevelt Hotel Hollywood is one of the most famous historic hotels in Hollywood and not just because it has a colourful past. It was the original home to the Academy Awards and it is believed to be ‘haunted’ by none other than its former tenant Marilyn Monroe, who lived there during the peak of her career. 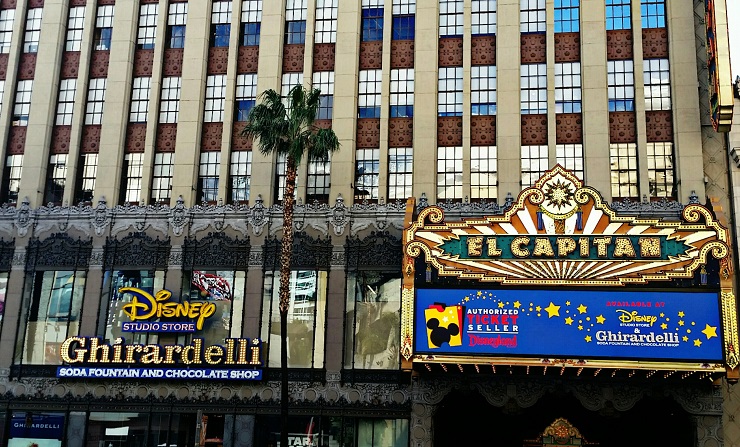 Situated on the Hollywood strip, across the road from the Chinese theatre and near both a shopping mall and where many local tours start, you can see why it is in a prime location amongst famous and tourist alike.

You are right in the heart of Hollywood in between all the excitement and action. With its big Neon sign down the side of the hotel, I can’t help but think it looks like the Tower of Terror ride at California Park.

It was in 2004 when I was on a “Home of the stars tour” (yes, very touristy & cheesy but a lot of fun)  and I remember the guide telling us about the history and how it was supposed to be haunted. My ears suddenly pricked up and I knew then that one day I wanted to stay in the Roosevelt to see if I could experience this myself.

I mean what a great story to tell the children if not only do you see a ghost but none other than Marilyn Monroe herself. Fast forward 12 years  (January 2016) and we are standing here at the entrance. 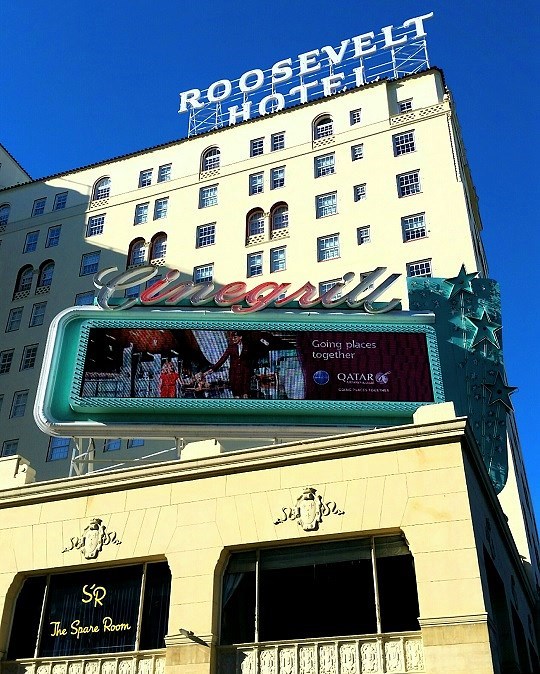 As we get out of the car with our overnight bags, I notice straight away how welcoming and friendly the staff are towards us especially at the reception desk. They had apologised that our room was not ready even though we had arrived really early and were not due to check in. The lovely concierge took our bags, while we went off to explore the strip and hotel.

The building and various public areas like the lobby are quite historic with its Spanish interior and high ceiling. Even though it has been modernised, they have still been able to keep its glamorous old stylish charm.  We did not use the amenities as we were on limited time but the hotel has a cool fitness center and an outdoor pool with two bars (one is like an oasis area) and the other next to the pool.

Read More Steps to Travelling with a Pacemaker or Defibrillator (ICD)

I understand that there is also an exclusive cocktail lounge, a game parlour with vintage bowling lanes, a celebrity haunt nightclub, and a 24-hour burger joint but to be honest I never saw this. 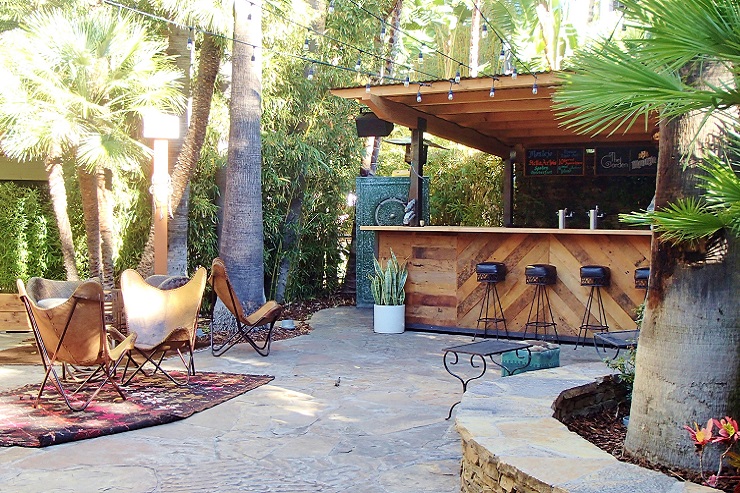 A good nights sleep at the Roosevelt hotel

We sat at the hotel bar enjoying a couple of drinks before retiring to our room; I was secretly getting excited to see whether we would experience a ghost (though I would be scared) and if the stories were true. We headed up to our room and prepared ourselves for the night in our big comfy bed. Without even realising, I had fallen sound asleep and it was morning already.

When I rose out of bed, I felt a little disappointed, not by the great sleep but how I had not seen any ghosts or had any paranormal activity to write about.

Star spotting at the Roosevelt Hotel

After we packed up our bags and were waiting in the lobby to be picked up, my husband leaned over to me and whispered into my ear. Is that Theresa Caputo from Long Island medium?, I looked up and said with a smile on my face, yes. I mean what are my chances of seeing my favourite medium while trying to chase ghosts in the Roosevelt hotel.

I got up and walked over to her and kindly asked if I could get a picture taken, she was very welcoming and accommodating. I refrained from telling her exactly why we had stayed there as I didn’t want to embarrass myself as I am sure she has heard it all before. As I walked away with my picture, all I could think was that was the icing on my cake for my great stay at the Roosevelt Hotel.

Our Room at the Roosevelt Hotel

Our room at the Roosevelt Hotel was spacious, light and modern with a comfortable four-poster bed. You could tell it had been renovated within the last couple of years. The bathroom was of average size with only a shower but it was very clean and tidy.

We were in the tower, which gave us some great views over LA and it was quiet at night. I understand though if you are near the pool in one of the suites it can get very loud especially on the weekend. 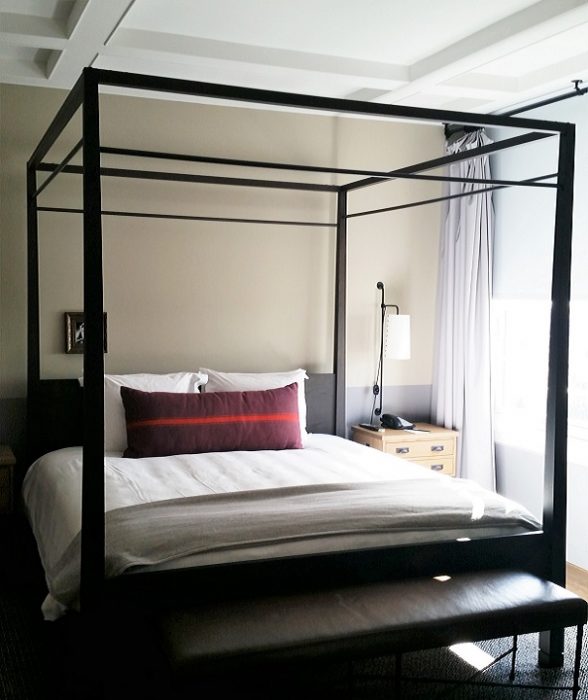 There were a reasonable sized flat-screen TV and a nice comfy chair to relax in. But there was no kettle with free coffee & tea satchels, instead, there was a Pod coffee machine which you needed to pay to have a coffee or tea in your own room. This is a little bit cheeky considering you’re already paying for the room and I know most hotels do this for free.

To use the WiFi in the bedrooms there was a daily fee, which I was not too happy about either, as most hotels offer this free. There was, however, free WiFi in the main lobby area for non-paying guests, which was a little confusing as I think this should be the other way around.

Location and how to get to the Roosevelt Hotel

If you are coming from LAX airport, I would suggest organising a transfer or getting either a taxi or Uber.

There are many tours available in the Hollywood area either walking or taking some form of transport. Roosevelt Hotel is in a great location for walking around to all the attractions within Hollywood. If you wanted to explore other suburbs like Rodeo Drive, Venice Beach or Santa Monica beach the famous Big Bus Tours Los Angles, starting point near the hotel.

Top Tips for staying at the Roosevelt Hotel 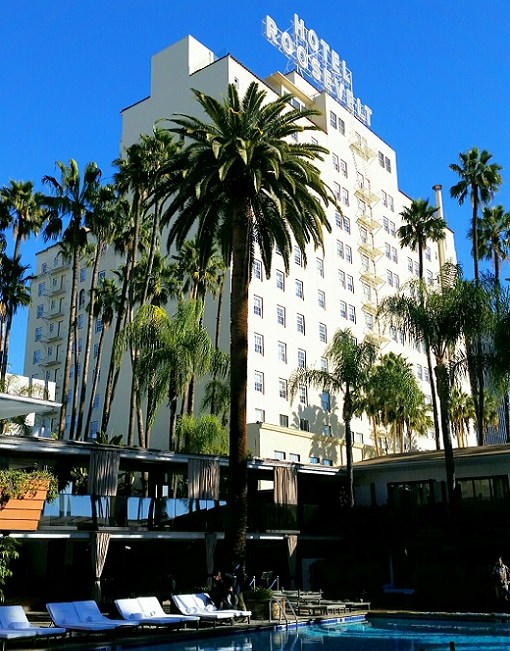 Would I recommend the Roosevelt Hotel

Would I stay here again? Yes, most definitely. The Roosevelt Hotel is a historic Hollywood icon, beautiful, full of history, a great choice of bars and restaurants and right in the heart of Hollywood.

I would love to return one day and spend some more time around the hotel using the facilities and hanging out by the pool bar at one of the many famous pool parties thrown here, while at the same time celebrity spotting. 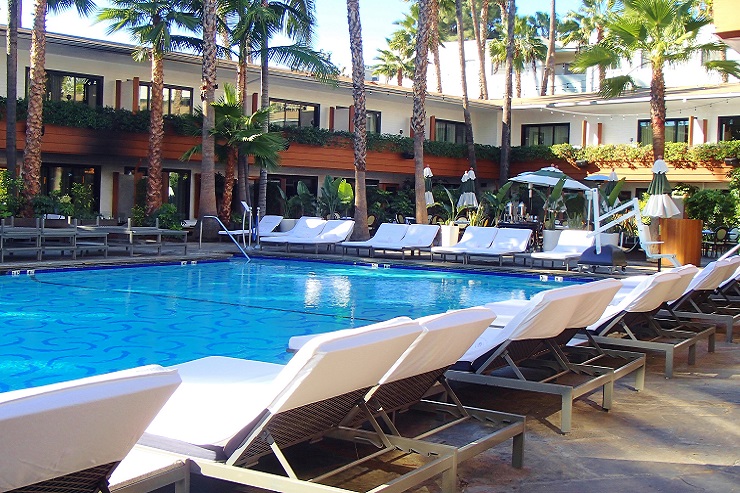 Yes, it is a little pricey these days but it is hard to get a modern hotel that makes you feel like you step back into time with all that old Hollywood glam.

Like what Marilyn Monroe quoted once ‘Being normal is boring’ and the Roosevelt Hotel Hollywood is definitely not boring. 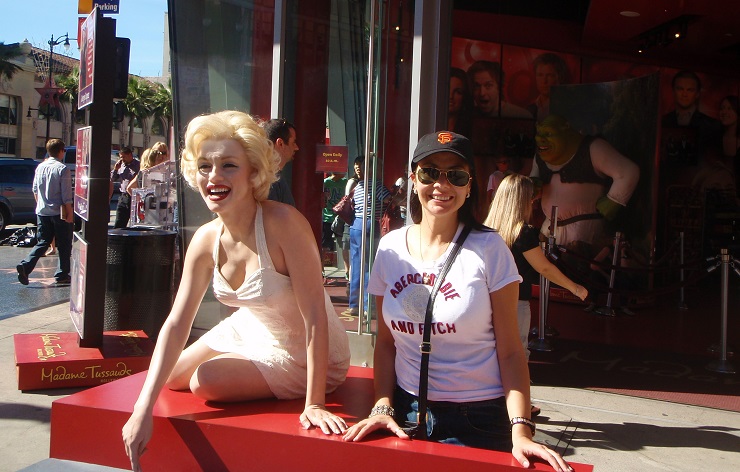 Additional Information for the Roosevelt Hotel

Wifi: – For additional fee in your free but free in the lobby

Booking enquirers – you can use the following link The Roosevelt

Thank you for reading this article ‘Chasing Ghosts, Hollywood Roosevelt Hotel Los Angeles’. It is such an interesting historical hotel that definitely deserves a visit, even if you don’t stay there.

Have you stayed at the Roosevelt Hotel Hollywood California before or about too? Share your experiences in the comments below or let me know if you need to know any more before your stay? I am always happy to help 🙂 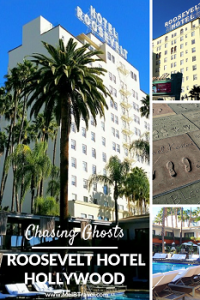 How about some these activities around Los Angeles, California

Disclaimer: I paid to stay at the Hollywood Roosevelt Hotel in Los Angeles, California and all views are my own and based on my own experience.