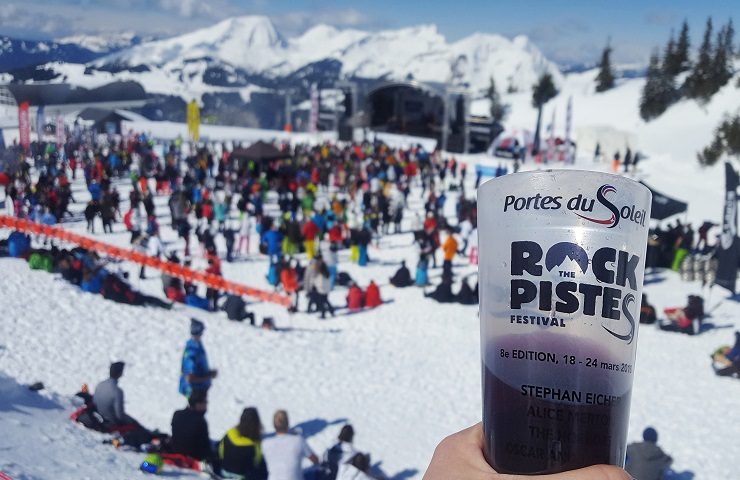 If you only ever attend one ski festival in your lifetime, then it would have to be Rock the Pistes. It is an annual ski music festival held in March for a week, across the Portes Du Soleil.  Each resort hosts a series of both indoor and outdoor events, with the drawcard being the on-piste concerts.

I was lucky enough to attend Rock the Pistes for a few days in the VIP section. I got to experience exactly what it is like to attend a concert at high altitude. I had such a wonderful time, the atmosphere was electric, the bands were great and the views across the Alps as your backdrop were stunning. There is no doubt in my mind that this one of the best ski festivals in Europe.

Portes Du Soleil is one of my favourite ski areas and one that I also recommend for all around ski holidays. It comprises of 13 resorts interlinking across both France and Switzerland with access to over 600kms of ski slopes. It is considered to be one of the biggest ski areas in the world and it is hardly surprising that so many people head to Portes Du Soleil during the winter season.

It also offers a wide range of activities on and off the ski slopes and also has a large selection of restaurants and pubs to cater for your needs.

A 360 in the VIP area at Rock the Pistes Festival

March is a great time to hold a music festival on the ski slopes. The pistes are quieter, the days keep getting longer and you are pretty much guaranteed some sunshine on your face. It is like having the best of both worlds, a summer holiday mixed with a winter holiday.

Rock The Pistes music festival provides the perfect opportunity to ski or snowboard while enjoying music from international acts from around the world while taking in spectacular views of the Portes du Soleil. The best bit is the concerts are absolutely FREE and are included in your ski pass.  Make sure that have the right camera for catching all those fun moments.

I attended the music festival for two days, the first day in Les Gets Ski Resort and the second day on the slopes in Avoriaz ski resort. With over 28,000 attendees attending the event, the atmosphere around the Portes Du Soleil was happy and fun. As soon as the music started, my ski boots were taping, even when I didn’t know the artists. I definitely got caught up in the general mood of the area. Not to mention the VIP hospitality made it a fabulous few days that I won’t forget.

Don’t worry if you get carried away with listening to the music because the ski lifts will stay open half an hour later than usual during the music festival. Even better is when you do head back after the concerts have finished on the slopes there are still a number of ancillary events to keep you amused and entertained in town. You can check out the line-ups for this season on the official website. 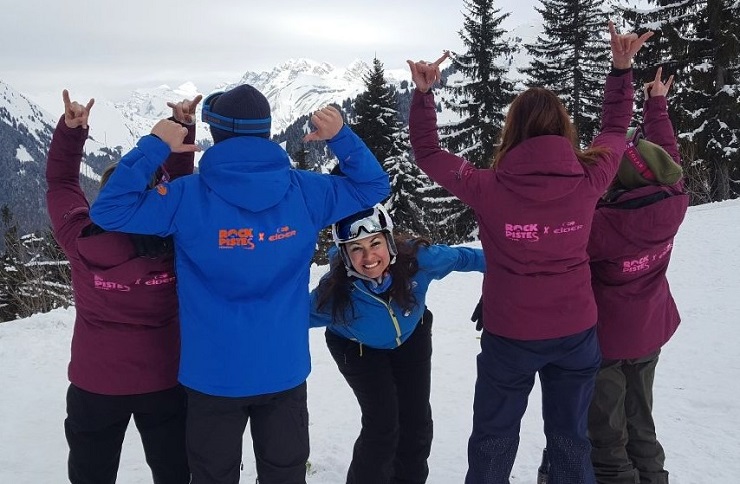 Having fun with the staff from Rock the Pistes Festival

Drinking and Eating at the music festival

Being in the VIP area meant that I was treated some amazing French and Swiss food as well as drinks. I ate everything from cheese fondue, cured meats to food cooked in giant pans like a bbq. Then washing it down with a nice glass of wine and pre-mixed drinks. My husband, on the other hand, couldn’t get enough of the chocolate and desserts while enjoying it with a nice cold beer.

Don’t worry though if you are not in the VIP section as every concert venue provides stalls that you can purchase food and drinks from. Nothing beats sipping a drink with the warmth of the sun on your face while enjoying listening to live music. As Rock the piste is taking an environmentally friendly approach, plastic glasses are available at the bars can be returned and used again (deposit applies).

Please remember to drink sensibly, as you will be on the slopes and need to ski back. You also don’t want to put others at risk of being injured. 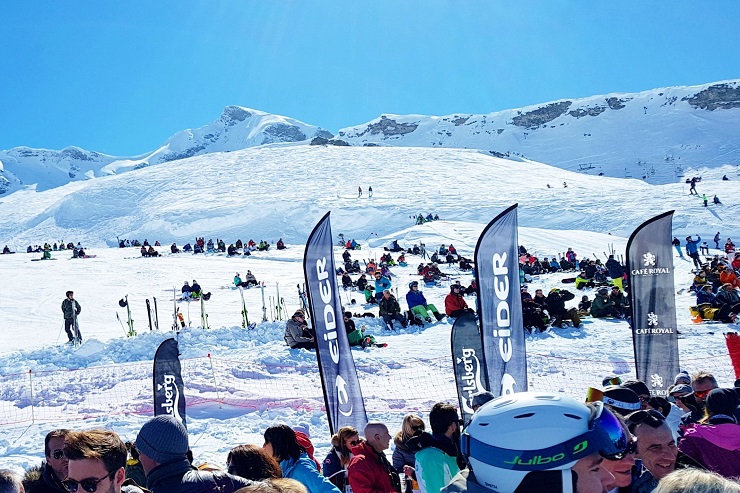 You’ll need a valid ski pass in order to access the main concert venues, even if you are not skiing. There are various ticketing options available for Rock the Pistes Festival but the best bit is that it’s a part of your ski pass price.

Prices are in Euro’s but for additional information and tickets for the Rock the Pistes Festival, you can go to the main site.

Don’t forget your GoPro for all those action shots while hitting the slopes in Morzine. 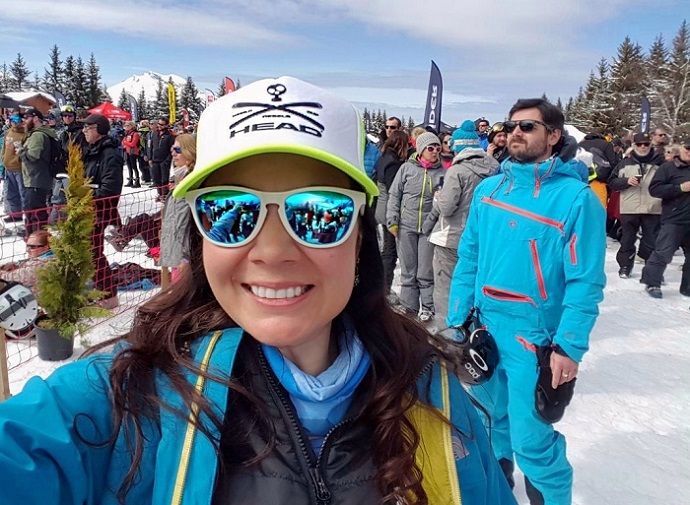 Go skiing in the morning

Take advantage of the 600kms of runs and go skiing or snowboarding in the morning before heading to the concert. Most of the concerts start in the afternoon around 1.30 pm with a DJ warming up the crowd from about 12.45 pm. Allowing you time to shred some powder.

I really enjoyed being able to get up in the morning and hitting the slopes first before the concert as the conditions were fantastic. Freshly groomed pistes and lots of sunshine all made sure the day started on the right foot.

The first morning I skied over in Mont Caly taking in the stunning views across Les Gets Ski Resort as well as Mont Blanc (refer below youtube). Before finishing up over in Les Gets ski resort where the concert was held near Le Vaffieu Chalet restaurant.  The second day, we skied from Les Gets through Morzine Ski resort over to Avoriaz for the concert. This takes a little time getting over to Avoriaz, as it is right on the Swiss border.

Read More –   Learn to Snowboard or Ski in England

Make sure before you go on your ski holiday that you have the right travel insurance. You can compare the best holiday insurance quotes for FREE before you go.

Getting to Portes du Soleil

Geneva is the closet international airport to the Portes Du Soleil ski area and offers one of the shortest transfers to both the French and the Swiss side. The best bit you can even catch a morning flight and be on the slopes listening to music in one of the resorts by lunchtime. Flying from any UK airport, instantly save on airport parking with Purpleparking before leaving.

From Geneva, there are numerous ways of getting to Portes Du Soleil Ski Resorts, buses, trains, private transfer, shared transfer all vary in price. It really just depends on which resort you decided to stay in and what you can afford.

Looking for convenience I suggest hiring a car from Geneva airport. You can compare companies and rates for FREE and book it in advance, so you get what you want and can usually lock in a rate straight away.

Where to stay for Rock the Pistes Festival

Just be aware that France and Switzerland use different adaptors (plugins). France uses standard European adaptors, while Switzerland uses two different types for electrical equipment. Plug type C (has two round pins) and type J (which has three round pins). 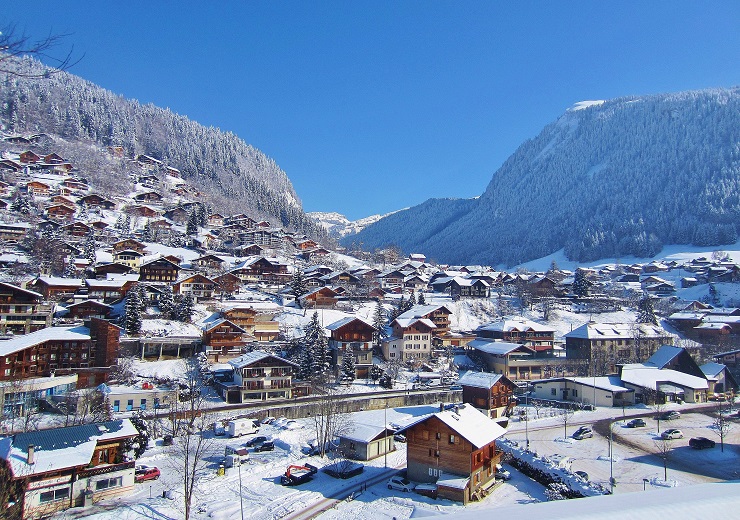 Overlooking the village of Morzine France

Discover the Ski Resorts in Rock the Pistes Festival

Discover other Ski Resorts in France, feel free to read the following. All are great options for ski holidays.

⇒ Before attending any ski music festival, make sure you have the right travel insurance.

Geneva has plenty of activities to do if you are staying there before or after your ski holiday. Or maybe simply want to take a break from skiing. 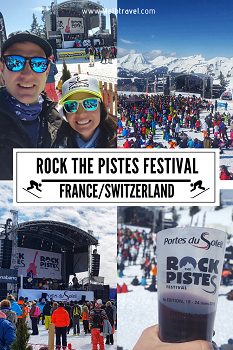 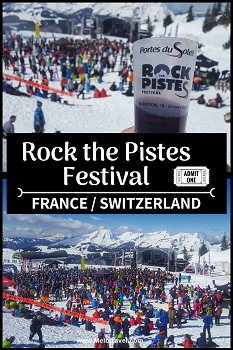 Have you been to a music festival before or Rock the Pistes? I would love to hear your experiences in the comments below.

Disclaimer: I attended the Rock the Pistes Festival as a guest of Portes du Soleil. All views and opinion are entirely my own.