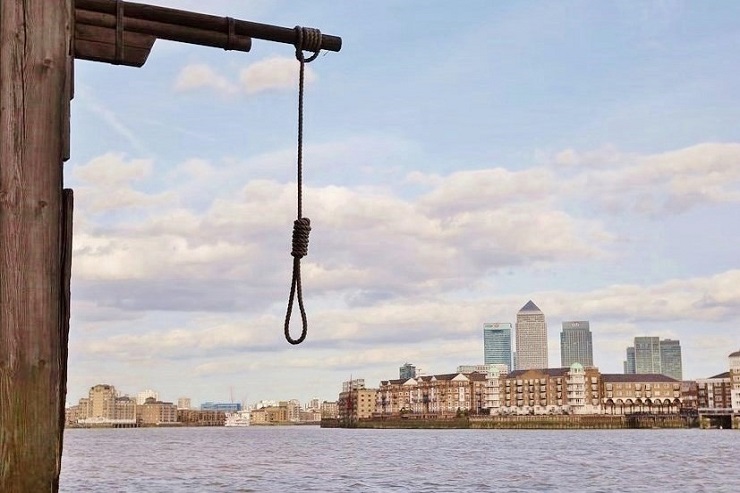 Combining both history and London pubs and restaurants on a tour in England will always win me over. The London Old Docks – Historic Pubs, Food & Beer Tour allows you to discover some of the oldest and most historically significant pubs located along the docks, which was known as old London town. 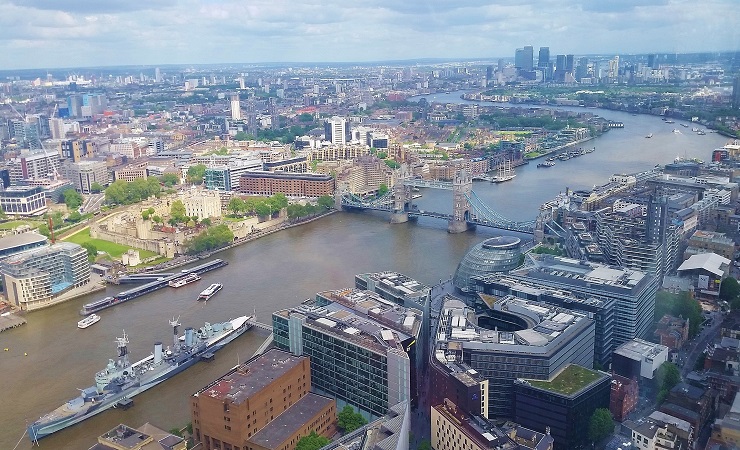 Overlooking the Thames from the Shard, London UK

When the opportunity came up to go on the new London Old Docks – Historic Pub, Food & Beer Tour run by Eating London Tours, I jumped at the chance. Especially because I had such a great time on their previous tour Twilight Soho Food and Cocktail Tour.

Back in the day, these pubs played an important role in the lives of sailors, dockers, and even pirates – a place where they met, intermingled, ate and drank. More than hundreds of years old, they now hold the testimony of the eras gone by.

Once a busy trading port, today this area is relatively more peaceful and offers serene and awe-inspiring riverside views of the city. As you visit these historic pubs, you will be able to picture in your mind’s eye the lives lived and the stories told! 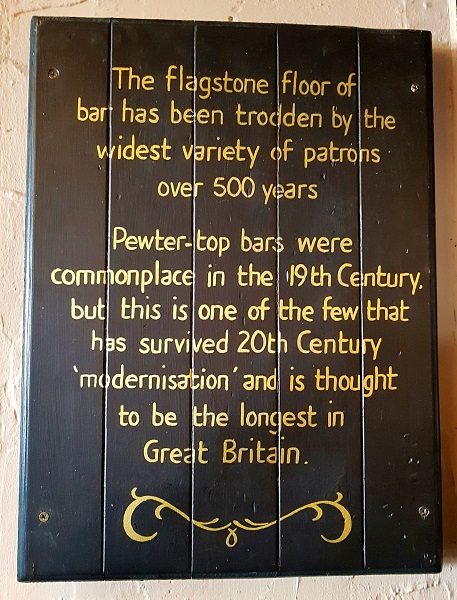 A sign in The Prospect of Whitby, London England

That’s not all. On this unique tour, you will also get to enjoy some of the finest brews that London has to offer along with a wonderful line-up of lip-smacking food that will surely tickle your taste buds and make the experience of re-visiting an old-time pub all the more realistic.

The Historical Pubs, Food and Beer Tour will leave you feeling suitably entertained with memories to cherish for years to come.

Memorabilia inside The Prospect of Whitby, London England

One of the things I loved on The London Old Docks – Historic Pubs, Food & Beer Tour was the variety of the 5 pubs.  All were old and historic in some way, but they each had their differences and stories to tell.

The first stop on the tour and only a 2 minute walk away from the meeting point is the famous Mayflower (or once known as the Ship). It is a charming little pub with baskets of fresh flowers hanging all over the facade. It is considered to be one of the oldest watering holes in London, rich in history and culture.

Flowers hanging all over the facade of The Mayflower, London England

Inside, the walls are covered in shipping memorabilia and they even have a log book for the ancestry of the sailors and pilgrims who stayed on the Mayflower ship.

Here you will be served an English classic of bangers and mash with black pudding and gravy. You will wash this down with a scurvy ale while learning about how The Mayflower became one of most historic pubs in the UK and how it played a very important part in American history in 1620.  Today, from the rear of the pub you can still see the original mooring spot of this famous ship. 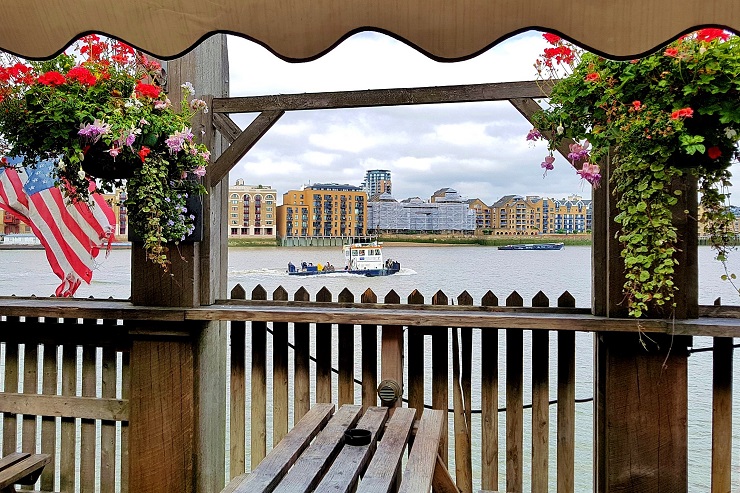 On the balcony at The Mayflower, London England

The Prospect of Whitby

Built in 1520,  The Prospect of Whitby (originally known as The Pelican) is believed to be the oldest tavern on the Thames. As soon as you step inside,  you will feel like you have taken a step back in time, the floor is the original flagstone dating back some 500 years (even with the original door trap that is now sealed off).

There is a rear deck that overlooks the former execution docks, complete with replica gallows and loads of interesting memorabilia.

The entrance of The Prospect of Whitby, London England

We sit for our 2nd classic British meal Fish and chips with mushy peas, washed down with a craft ale.  As we listen to our guide, the first thing that comes to my mind is the phrase ‘If these walls could talk” they would tell you a story.  The stories seem never ending, from the pirates to the cruel executions served by hanging judge Judge Jerries. 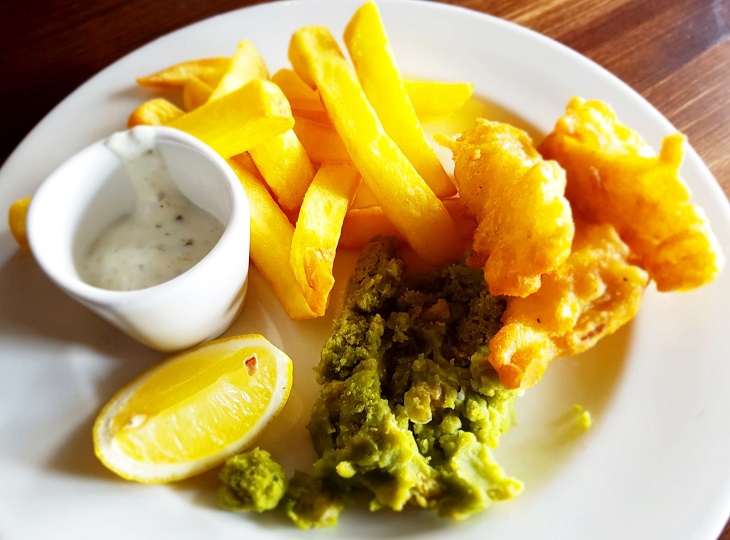 Fish & Chips at The Prospect of Whitby, London England

Turner’s Old Star looks exactly like you would picture a typical English pub. It is one of the last remaining traditional East End pubs that is independently owned. Renamed after the famous artist Joseph Turner,  who was inspired by the docks and the ships that frequented the waterways. Today the pub is used in many movies (most recently Legend starring Tom Hardy) and is famous in its own right. 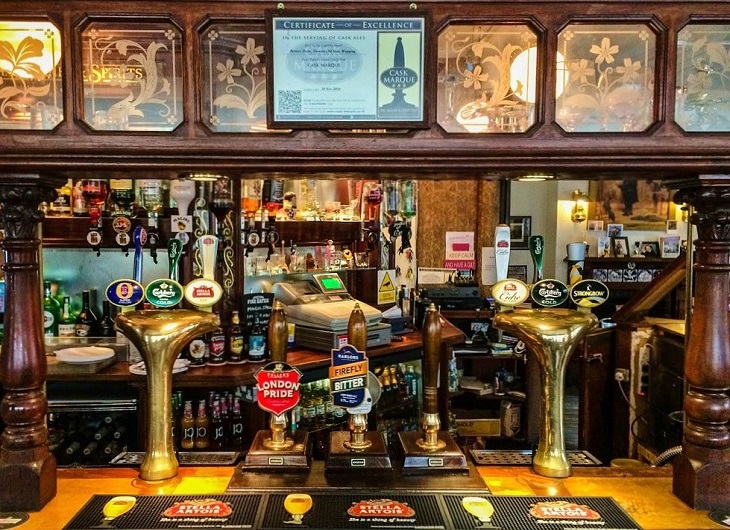 Once you step in you are greeted by the owner (Bernice), who will pour you a London favourite ‘London Pride’ (I had a cider, no more beer for me) and give you a homemade steak pie. As you may know, I am Australian and we love meat pies, even when we are full. If you have time, take a wander and look at the photos on the walls and see how many celebrities you can name.

Named after a 17th-century pirate (William Kidd) who was executed in 1697 and built inside a former coffee warehouse on the river is Captain Kidd. Unlike the other pubs, it is spacious, has a huge beer garden and is more modern. In some ways, you can tell it is corporately owned with its own labelled beer and snacks that line the bar. In this case, though, it is Samuel Smith label that is used in this bar.

Here instead of an English classic meal (you’ll need a break after all the yummy food), you will enjoy a classic pub snack the ‘hairy snack’ while sipping on a porter. The porter had a strong smell and taste was definitely different from the ales. 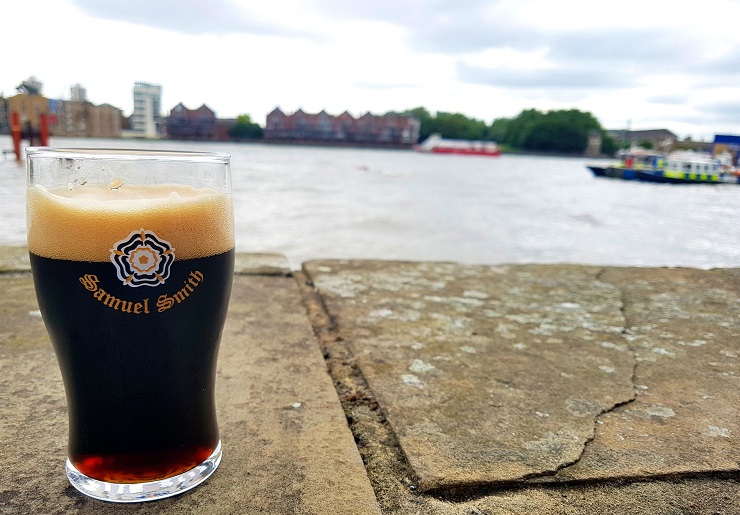 What better way to end the tour than at one of my favourite pubs in London, The Dickens Inn. Completely covered in fresh flowers, this former 18th-century three-storey warehouse with balconies definitely stands out. It has a long and intriguing history intertwined with Charles Dickens and East London heritage. When you look at the slant on the roofline, it is higher on one side than the other. 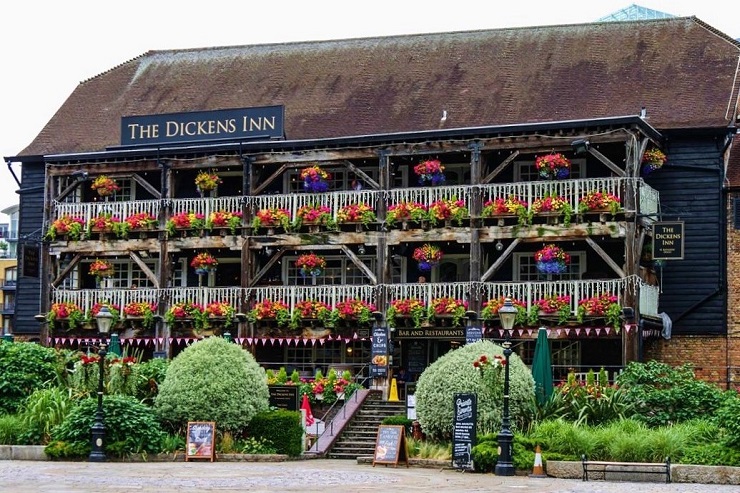 The entrance at The Dickens Inn, London England

You finish off with a delicious Cheese platter, dedicated to English cheese such as stilton and cheddar that was paired with a Symonds cider. A great way to end the tour after a fantastic time learning, eating and drinking.

I love Eating Europe Food Tours concept behind their tours of discovering unique facts about a city through tasting different foods and experiencing and learning the culture.

Looking for other great Pub Guides

If you like the tour, the great news is that Eating Europe Food Tours also operates in Amsterdam, Florence, Prague, and Rome. The best bit is they conduct a variety of well-designed and thoughtful Food Tours and Cooking Classes, depending on your interest. Which gives any food lovers and budding travellers a chance to explore some of Europe’s most beautiful and soulful cities through their food. 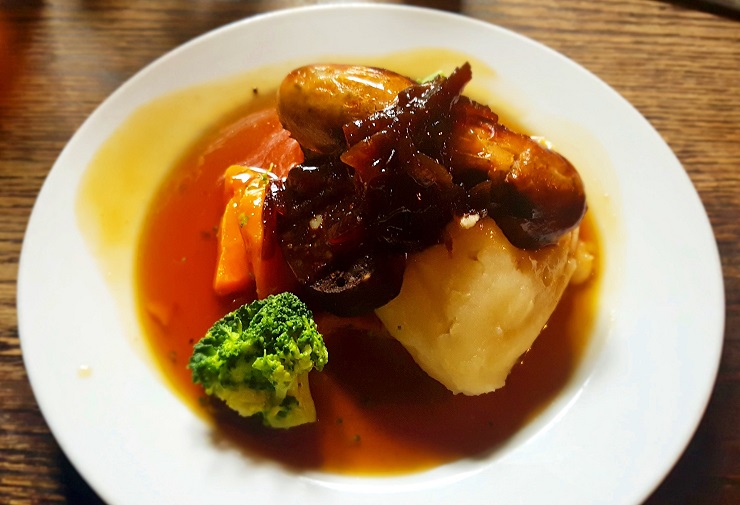 Other Tours they have in London

There are a number of other tours that are currently held in London, I highly recommend the Twilight Soho Food and Cocktail Tour. I also, understand that the Brick Lane is really good especially if you like a good Curry.

Where it starts & finishes

The food tour takes place in Rotherhithe/Wapping, a 2-minute walk from Rotherhithe Station. And finishes at The Dickens Inn in St Katharine’s Way and only 5 min walk to Tower Hill tube. Once you have purchased your ticket, London Food Tours will provide you with a map and easy to follow instructions for the meeting point.

Other Historical places of interest in the UK

If you are interested in discovering more Historical place in England, feel free to read my following articles. All are great options for groups of friends or family, especially who love learning about history and want a great day out in London.

Read More – A Day out at Hever Castle – Kent, England

Thank you for reading this article, I hope it helped you in deciding to do the London Old Docks – Historic Pub, Food & Beer Tour. It is such an interesting tour. Disclaimer: Even though I was a guest of the London Food Tours  All views are my own based on my own experience.