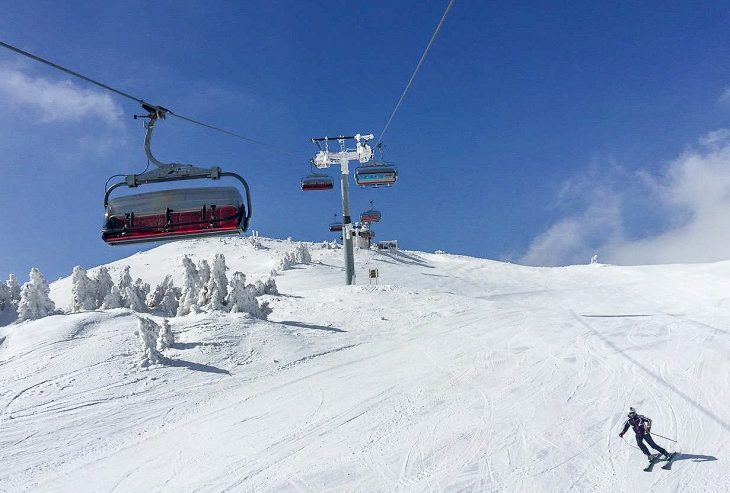 Jahorina Ski Resort Bosnia and Herzegovina is the perfect place to ski or snowboard if you want value you for money or want to learn. With it only being a 45 minute drive from the capital city Sarajevo,  you can combine adventure and history together creating an unforgettable skiing holiday.

On the slopes of Jahorina Photo provided by Olympic Center Jahorina

As a prime destination to ski in Eastern Europe and due to the value for money, I understand why it is becoming such a popular place for cheap skiing. Not to mention the beautiful winter landscape.

It has been over 3 decades since the Eastern European city of Sarajevo hosted the Winter Olympics in 1984, but what was once preened pistes of Jahorina Ski Resort were damaged during the Bosnia war of the 1990’s. Now rebuilt and with 20 million spent in the last 5 years on chairlifts and facilities, Jahorina Ski resort Sarajevo has definitely come a long way. 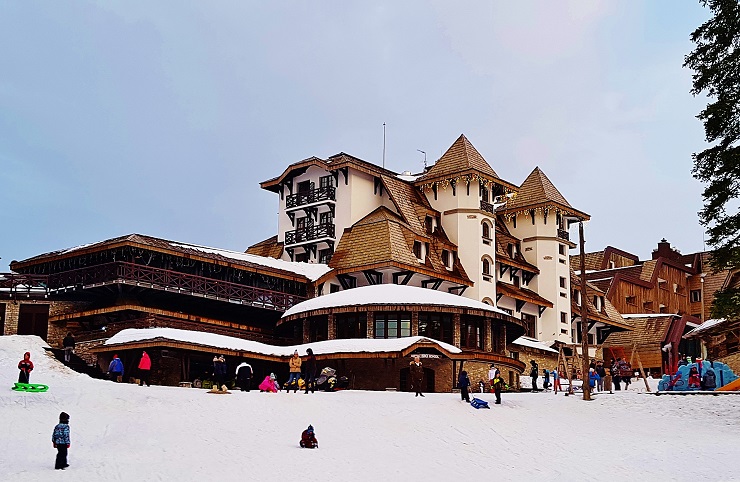 I was not sure what to expect when I was invited along to Jahorina Ski Resort Sarajevo with  Ski Sarajevo for 5 days to explore the resort. Lots of things ran through my mind, will I get bored with a small resort, what is it like compared to the capital city that I have visited.

What I got though was an appreciation for the Sarajevo Ski Resorts and an unexpected pleasant surprise of the quality of ski slopes and how modern the resort had become. I was definitely impressed how the slopes are spread out too across the mountains, so it never felt like a small resort and the friendliness of the people made me feel very welcome. 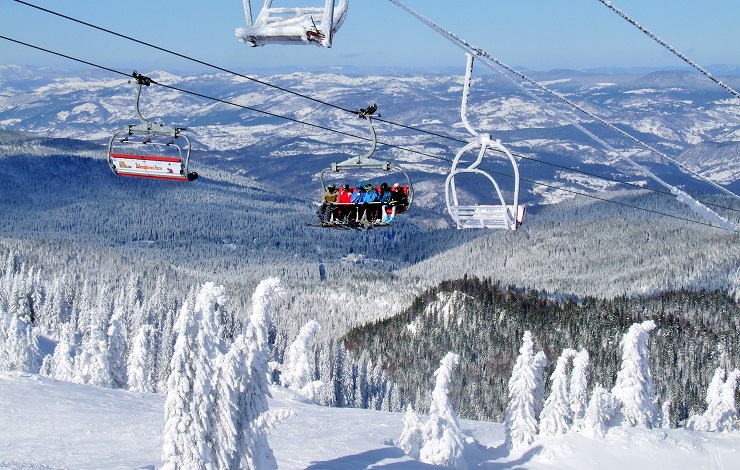 On the chairlifts Photo provided by Olympic Center Jahorina

Though often overlooked to other ski destinations in Eastern Europe, Jahorina Ski Resort Sarajevo is definitely a resort coming into its own and one to watch out for in the future. Surrounded by mountains, the area offers some amazing outdoor adventure activities. What was appealing to me was the fewer crowds and the value for money compared to other better known Ski Resort.

Top Tips for Saving Money for a Ski Weekend

Whether you are an expert or a complete beginner, Jahorina Ski Resort Sarajevo has slopes to accommodate any level.  Small slopes, long slopes, short slopes, steep slopes, they have you covered. Making a great place for all skier types and levels. 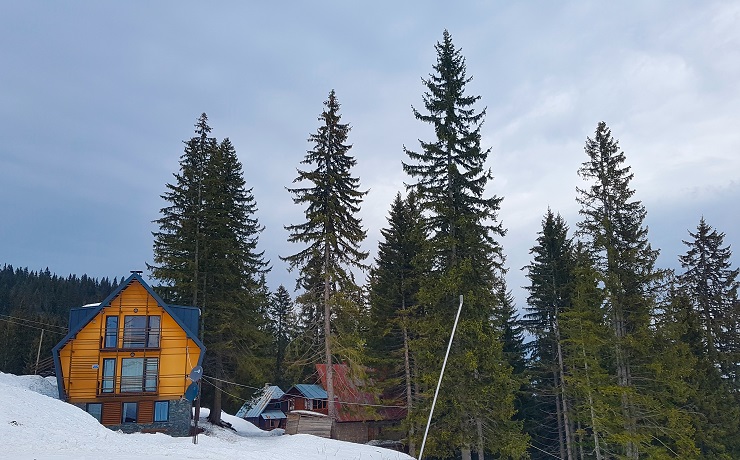 A cabin on the slopes of Jarhonia Ski Resort Sarajevo

The Jahorina Ski pass costs around £18.00 a day and £72 for a week, skiing in Sarajevo is very affordable for everyone and undoubtedly great value for money. Granted that there are not hundreds of klms of runs but in comparison, this will cost you around quarter than what you’d pay at resorts in the Alps for the week and there is plenty to do other than skiing.

If you don’t have your own equipment, no worries, you can rent equipment for around 10 euro a day, depending on what you get. 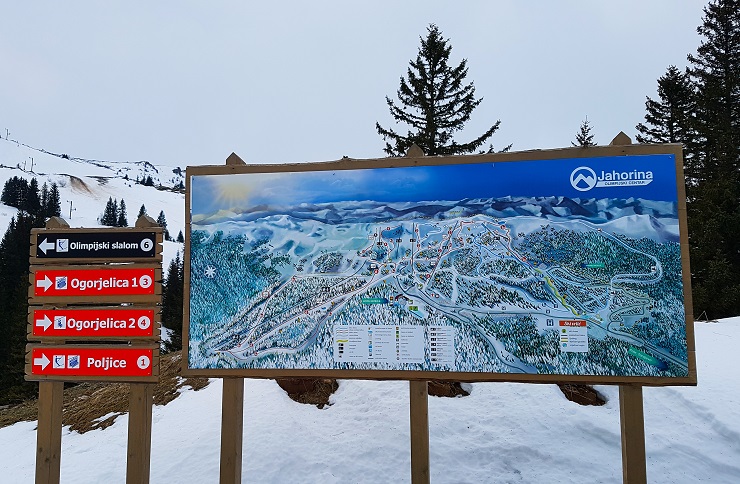 An Ideal Place for Children and Beginners

Jahorina Ski Resort Sarajevo is a fantastic place for beginners and children to learn how to ski. The slopes are wide enough and spread out that any beginner or child would be comfortable learning on them and any parent would feel safe knowing this. Not only this but ski school like the lift pass are undoubtedly great value for money.

Beginner slopes are available at both Jahorina and Bjelasnica where you’ll also find professional and encouraging ski instructors. 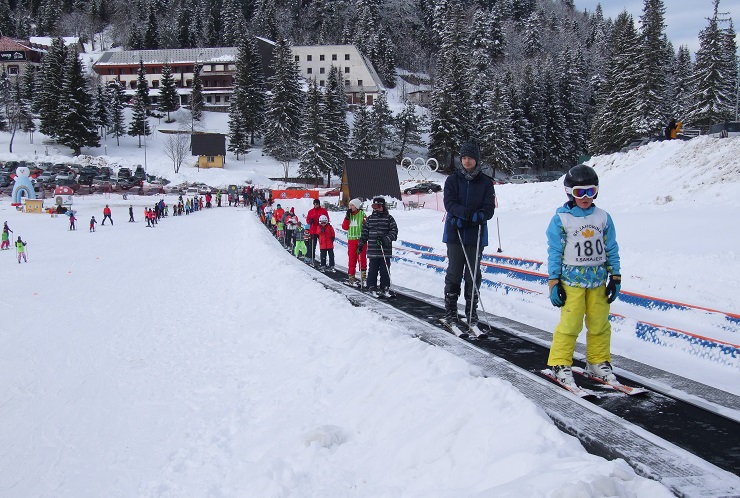 One of the things I love about being on a work ski trip is that you get the opportunity to ski with some top local ski instructors. They show you some of the hidden gems and the best ski slopes that the resort has to offer. If you are anything like me, you also get to learn new techniques and make some new friends at the same time, making it an added bonus.

Whether you are an experienced skier, a complete beginner, a group or a family, getting a guide can be a great idea for everyone.  They can help you improve your skills, make you feel more confident and generally enhance your skiing or boarding experience.

One such ski school in the Jahorina Ski Resort is the Ski Sarajevo Ski School, which aims to understand the needs of clients so they are able to get the best out of their winter holiday. The ski instructors love of winter sports, use of foreign languages (especially English) and sense of humour is what makes them stand out from the crowd. Nothing is too much trouble for them and everything is done with a smile.

Best Ski Resorts in the World, chosen by Bloggers

My guide from Ski Sarajevo Ski School was Nikola, we had a great time together, he showed me some of the best ski slopes in the resort, took me night skiing and generally helped me polish my skiing skills. Overall he made me an even more confident skier and enhanced my Ski Sarajevo experience.

You can book your lesson, group lessons or guided ski tours through Ski Sarajevo website and see the team.

A selfie with Nikola my guide from Ski Sarajevo

It goes without saying skiing under the stars can be amazing, especially when the sky is clear and the ski runs are perfectly prepared. If you wanting to do something different with your friends or kids then night skiing is Pale is a great idea. Yes, Jahorina has its own night ski run but if you want something different and want to check out a different ski area, then Pale will be ideal. 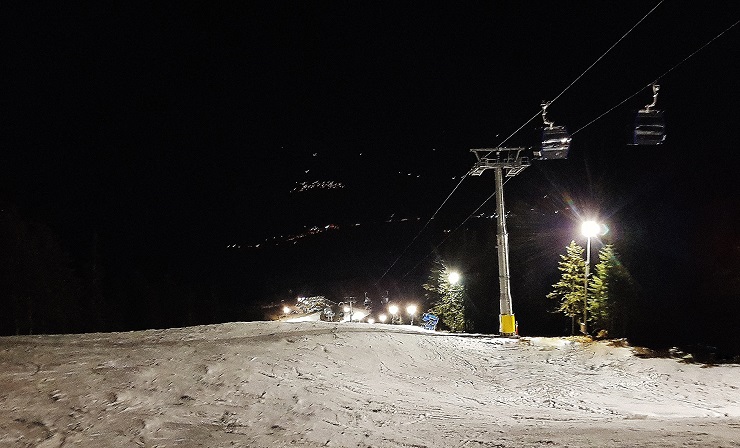 At the top of the night run in Pale – Sarajevo

The capital city of Sarajevo is around 21miles drive from the Jahorina Ski Resort. Whether you stay there throughout your holiday or take a few day trips as a break from skiing, the area has so much to offer. From taking a guided tour of Sarajevo city and War Tunnel to a day trip to the village of Mostar. There is so much to learn about the country’s rich history and culture and plenty of great photo opportunities.

Overlooking the Capital city of Sarajevo

Here are a couple of activities that you can do off the mountain:

A trip to Jahonia Ski Sarajevo is not complete without doing a stopover in the vibrant and intriguing city of Sarajevo or taking a day off from skiing or snowboarding.

Sarajevo the capital of Bosnia and Herzegovina is a compact city on the Miljacka River and surrounded by the Dinaric Alps. It has a unique, dark and interesting history and in the 1990s Sarajevo was besieged and on the edge of annihilation.  Step forward to today, the city is an exciting place to wander around in and explore its restored historic centre.

It is also a great place to take in the local culture and enjoy the welcoming cafes and restaurants that are great value for money.

If you love history and want to know more about this unique city, then I highly suggest the War Tunnel add-on. This is considered to be a popular all day tour that you can either do the City walking tour in the morning and the Tunnel Tour in the afternoon or vice versa.

Read More – The Italian Side of the Matterhorn, where you can ski?

I visited the War Tunnel on my first trip to Sarajevo over 6 years ago now and I have to say I thought it was such an interesting place to visit and learn about. The 25m section of the 1m wide, 1.6m high hand-dug tunnel under the airport runway is definitely claustrophobic when you enter the entrance of the tunnel.

It is a great way to understand what they were feeling every day when they travelled through this tunnel underneath the airport.

The house over the Tunnel of Life – Sarajevo Bosnia and Herzegovina

It is interesting to learn how this tunnel acted as the city’s lifeline to the outside world during the 1992–95 siege, when Sarajevo was virtually surrounded by hostile Serb forces. Alongside the tunnel are a museum, a minefield garden and the house that hid the entrance to the tunnel.

Inside the museum of the Tunnel of Life

Restaurants and cafes on the Mountain

Whether you need to take a break or warm up a little, you will find several cafes and restaurants along the slopes in the Jahorina Ski Resort Sarajevo to choose from.  My favourite was Mountain House Rajska Vrata where I would stop of for a coffee in front of the opened fireplace.

It is located in one of the most beautiful parts of Jahorina, Rajska Dolina(Paradise Valley), which you can get to using the Ogorjelica ll chairlift or via the road behind the San Hotel if via foot. 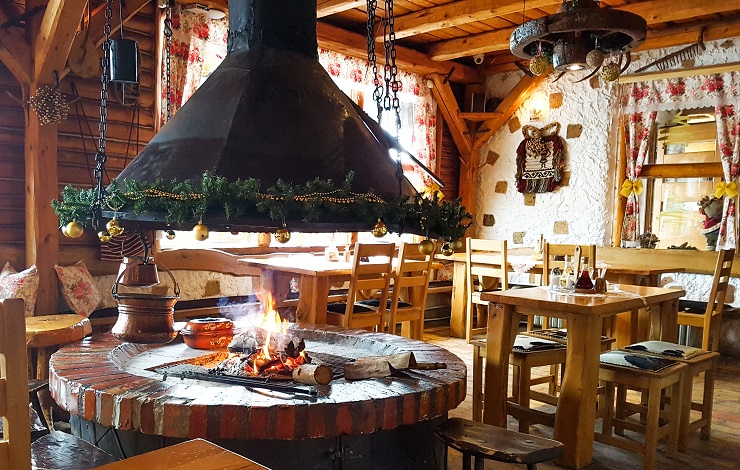 Where to stay in Jahornia Ski Resort

There are loads of accommodation available in Jahorina and since the war, the resort has made a big effort in revamping old hotels and building new ones.  You can find luxury hotels, chalets, apartments or B&B style accommodation, there certainly isn’t a shortage of options to choose from. There is also the option of staying in the capital city of Sarajevo which is only a short drive away.

I stayed at the Hotel San in the Jahorina Ski Resort, which was conveniently located 5mins downhill from the Ogorjelica I chairlift and around the corner from the Jahorina Olympic Centre. The hotel had everything that I needed from a ski hotel, like ski storage, strong Wifi, a hot shower and good friendly service.

The half board food was pretty good too and if there was anything else you required then the staff were happy to help. It definitely was value for money and you can’t go wrong when you basically step out your door and straight onto the slopes.

Ski Sarajevo also offer 4-star chalets and apartments under their Gold medal category, which are worth checking out as well.

Location & How to Jahorina Ski Resort

The closest international airport is Sarajevo International Airport (Also known as Butmir Airport) and is only 13.5miles away from Jahorina Ski Resort. Making it one of the quickest and most accessible resorts to get to in Europe.

There are numerous ways of getting to Jahorina Ski Resort Sarajevo from buses, private transfer or shared transfer. All vary in price but to be honest it is so affordable that a cab would be just as cheap. 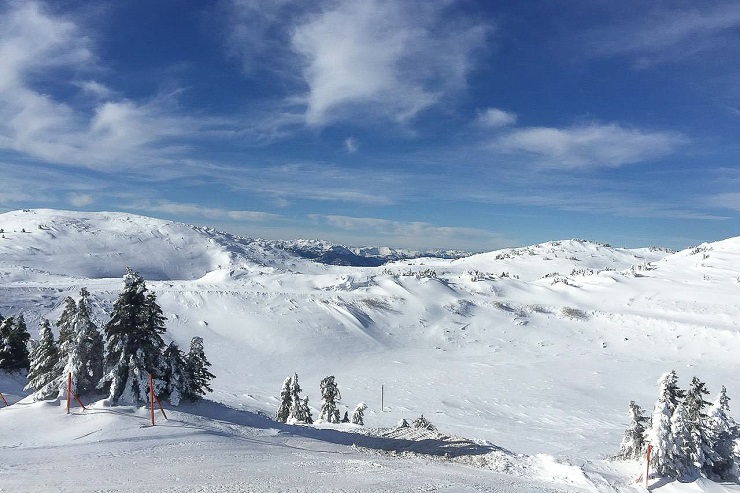 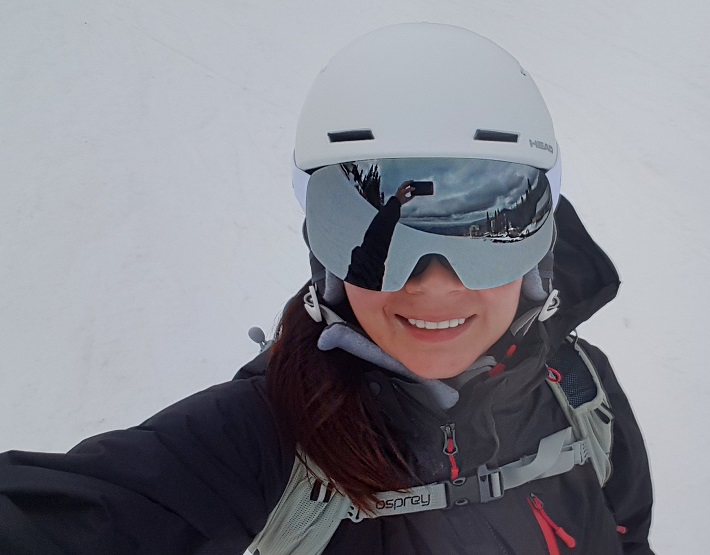 Thank You for reading this post ‘Jahorina Ski Resort Sarajevo – Combining History & Adventure’  I hope that it helped you in deciding where to ski this season and gave you some inspiration to hit the slopes in Eastern Europe.

I definitely know that I will be going back to Jahorina Sarajevo to ski, especially for a weekend break. As it is definitely value for money Ski Resort.

If you are interested in wanting to visit other Ski Resorts in Europe feel free to check out the following articles. All are great options for groups of friends or family.

Have you been to Jahorina Ski Resort before? I would love to hear your experiences in the comments below.

For more information, please visit the Ski Sarajevo website or you can email me directly

Happy Skiing and enjoy your adventure!!!!!! 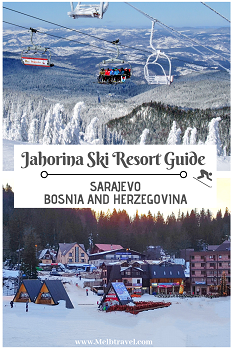 Disclaimer: Even though I was a guest of Ski Sarajevo All views are my own and based on my own experience.

Remember that you always need a good Ski Coat

before your next adventure.