Ponte Vecchio Bridge is one of the great icons of Florence Italy and is considered to be one of the most famous bridges in the world. The Ponte Vecchio Bridge (meaning “Old Bridge”), is a medieval stone three-arch bridge over the Arno River with shops built along with it. Butchers initially occupied these shops but now jewellers, art dealers, and souvenir sellers fill them.

The picturesque bridge has gone hand in hand with the Florentine people and the development of the city across the centuries, meaning there are many stories to be told about Ponte Vecchio bridge.

To help get you started on your journey over Ponte Vecchio Bridge. Here are 5 fun history facts;

1- Not the Original Bridge

Anyone who has ever visited Florence would have seen or crossed the Ponte Vecchio Bridge, over the Arno river exploring the many shops that line it. However, this is not the original bridge or shops that stand here today.

It is believed that the original bridge was built by the Romans in 996 from stone and wood. Then it was destroyed twice (1117 & 1333) by the many floods that use to frequently sweep through Florence.

The current bridge was designed by Taddeo Gaddi and rebuilt in 1345 to withstand being destroyed by the floods. He had the arch’s lowered which meant they used fewer pillars and allow for the heavy water and debris to flow underneath the bridge more freely.

This seemed to have worked because in 1966  when a catastrophic flood hit the city again, only the shops were damaged but the pillars survived being hit by the large debris carried by the floodwater.

⇒  How about taking a walking tour of Florence and learn more about this historical city?

To recoup some of the money that was spent on rebuilding the bridge after completion, the Florence government decided to rent out the shops that were built on the Ponte Vecchio bridge. The previous shops that occupied the bridge were originally built of wood and would easily catch fire. So, when they rebuilt the bridge they used stone for the shops.

At first, the shops were rented out to butchers, however, this made the area on and around the Ponte Vecchio Bridge extremely dirty creating unpleasant conditions. To enforce the prestige of the bridge again, in 1593 it was prohibited for butchers to sell from there and were kicked out.

Their place was immediately taken over by gold merchants, which is still what currently occupies the shops today alongside art dealers and souvenir sellers.

The Vasari Corridor is an elevated enclosed pathway that goes from Palazzo Vecchio to Palazzo Pitti, crossing over the Ponte Vecchio Bridge. It was created so the Grand Duke could move freely between his residence and the government palace.

The addition of the Vasari Corridor changed the character of the bridge considerably. There were originally four towers guarding the entrances to the Ponte Vecchio bridge. When the corridor was built, one family refused to tear their tower down, so Vasari was forced to build a “detour” to go around it. The Mannelli tower can still be seen on the south side of the Arno today.

Benito Mussolini wanted his guest of honour Adolf Hitler to admire the view of Florence Italy from the Vasari Corridor during his State Visit in 1939. So he had the original three windows in the centre of the bridge made into one large viewing gallery for this benefit.

They say it may be just as well that Benito Mussolini did this for Adolf Hitler. As legend has it that this view convinced him and his German officers to spare the Ponte Vecchio Bridge from being destroyed during their 1944 retreat.  Instead, they went on to destroy all the other bridges in the city, during the end of World War II.

Then only reduced the buildings at both ends of the Ponte Vecchio bridge to rubble, in order to block the streets and

⇒ Read More: The Italian side of the Matterhorn, Breuil-Cervinia Ski Resort Italy

The bronze bust that you see on the Ponte Vecchio Bridge is of Benvenuto Cellini. The statue was erected in 1901 to commemorate the 400th birthday of the famous Florentine goldsmith. He was a master goldsmith, sculptor, musician and artist (amongst other things). His statue is there to watch over the glittering windows of these prestigious shops.

⇒  If you are visiting Florence and want to marvel at famous statues in one of Europe’s oldest Museums. Then purchase a Fast-Track Ticket for Uffizi Museum

The legend of Lockers

Legend has it that if you or your loved one attach a padlock to any part of the bridge. Then throw away the key into the Arno River, then you will have eternal love. This legend has become so popular that the overabundance of padlocks has given the bridge a gaudy appearance. To fix this the government had resorted to having them gradually removed to try and clean it up.

However, for a period of time when they continued removing the padlocks, they kept on multiplying. So, the government introduce a hefty penalty to anyone who was caught locking anything on the Bridge.

Today, lovers simply come to the famous bridge to touch the remaining padlocks that are attached to the fence around the statue of Benvenuto Cellini, hoping they can to have eternal love. If, you are looking wanting to see the bridge and other famous Florence landmarks at your pace. Think about taking the Hop-on Hop-off Bus Tour where you can get a 24, 48 or 72-Hour Ticket in advance. 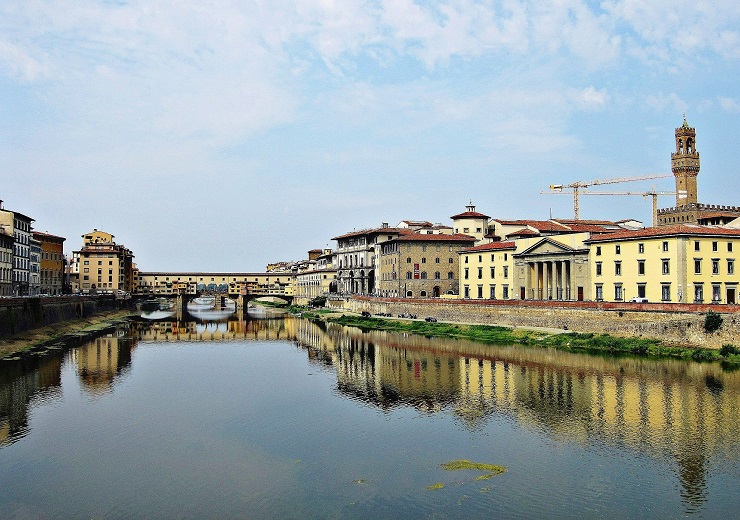 Discover other parts of Italy

Looking to discover other parts of Italy? Feel free to read the following articles. All are great options for groups of friends or family, especially those who love the outdoors.

⇒  There are some amazing day trips that you can take from Florence with the option of having lunch and wine.

Thank you for reading this article about the bridge, I hope you learned something new about the Ponte Vecchio Bridge.

If you are interested in reading more about bridges and history, here are two good recommendations. The Bridges (New edition): A History of the World’s Most Spectacular Spans or fun facts about Tower Bridge London. 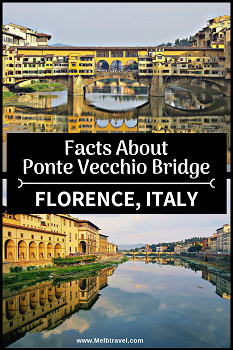 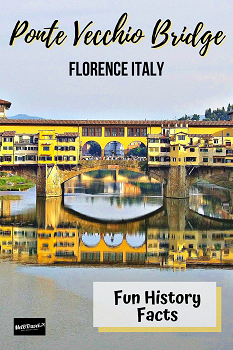 Do you know any other fun facts about Ponte Vecchio Bridge, Florence Italy that I could add to the list? I would love to hear your suggestions below.

Disclaimer:  All views are my own based on my own experience. 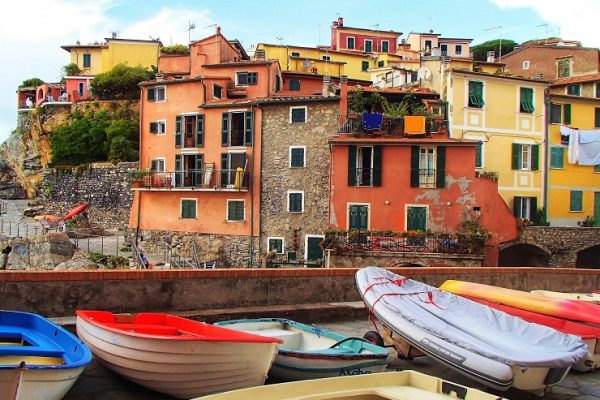 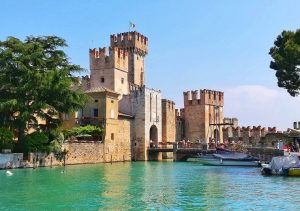